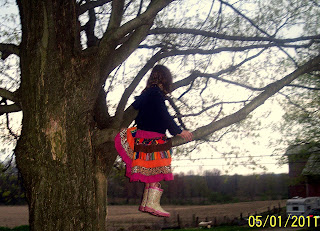 The ladies at Defining Beauty Blog have challenged us to what is becoming an annual Dress Dare. Now, this is particularly easy for me since my daughters wear dresses on a pretty regular basis for two reasons.

1) They grow so fast we'd be buying shorts or pants every month. No really, I know every parent complains about how fast their kids grow, but ours is crazy. And they don't get any bigger in the waist. Dell, being a young woman, quickly spits out some crazy curves. (No kidding, if her bra size was only a bit larger she'd have the same measurements as Barbie. We're looking into convents now.) As for Sparrow, she just grows like a bean shoot, always taller, no wider. So really, pants aren't practical at all.

2) They like them. No really. I got the story that they weren't allowed to wear them in the foster home. Now I take that with a grain of salt. It could be that someone was trying to wear a particularly bad skirt or was being inappropriate in one and they had to say no. Or it could have been completely made up to get what we want. I don't know. But there's fewer things that make them happier than getting to spend 10 bucks on new skirts and dresses at Goodwill.

As for me, I'm kind of riding the fence. But there's one thing I do know. FarmerGeek really likes it when I wear skirts. And for him I would do pretty much anything.

My heart is completely crushed...

For the tradgedy in Arizona...   What hurts worst is that the man who could so carelessly snuff out those lives won.  He did.  Here we are driving a wedge to further and further rend apart the two factions of our country.  You know who I heard was to blame for the tradgedy?  Sarah Palin.  That's right Sarah Palin who went home that night and hugged her babies and cried because underneath it all- it could have been her.  Because she's a woman in politics who's had as many death threats- if not more!

Right now everyone is blaming the Tea Party for inspiring hatred towards the government.  But here's the fallacy of that.  We won.  We have no reason to hate the government. (And seriously, there was no anti-government hatred when Bush was prez?) Quite honestly we didn't like Gifford's policies but we like the way she did her job.  I apologize, she DOES her job, I don't mean to speak past tense- I believe she WILL be back doing what she loves as soon as her heart heals- which I daresay may take longer than her brain.  We believe in a two party system, and welcome opposing viewpoints as long as they are in keeping with American principles. We believe that a political candidate has every right and in fact SHOULD be able to speak publicly.

But what hurts the worst for me is that people keep speaking to me as though I wouldn't understand, all because I don't agree with her political agenda.  I don't belong to her party.  But I'm a woman.  And the judge standing next to her who lost his life and the little nine year old girl who was gunned down were both Catholic.  I'm Catholic.  Most importantly, I'm an American.  I'm a human being.  I don't need any more than that to be profoundly affected by this.

Yet we are using this to drive ourselves further apart.

So I challenge you to go beyond the moment of silence today.  I say it is time to start flying our flags again in honor of a little girl, born on the day of our worst moment in American history and her life snuffed out in a cruel and brutal attempt to recreate it.  Remember the day Christina Taylor Green was born?  Remember 9/11/2001?  She was in the book Faces of Hope, featuring babies born on that dark day.

Perhaps the Lord is using her to remind us all that it's time to hope again.
Posted by Megan at 9:08 AM 1 comment:

As anyone who homeschools knows, it's always nice to have a schoolroom to work in.  Ok, nice being a very weak word.  Very weak.  Actually if my teenager wrote that down I'd correct her and make her write a more descriptive word.  How about moral imperative?  Now I'm being hyperbolic I know and it's just as bad.

We have been working on our school room for three major reasons.
1) The teenager refuses to do anything independently and if I have to sit with her all freaking day I might as well enjoy the room.

2) After watching the absolute joy (not) of Sparrow returning to school after break, I'm fairly certain they will both end up being homeschooled.  I simply cannot tolerate watching a 7 year old that depressed. Even though she swears she's not.

3) My in laws gave us a new computer for Christmas.

It's in the process of being cleaned out and reorganized.  Actually, it'll take a while, since right now the toys are also being stored in here and are moving once the tax return comes in.  Then we'll be able to buy a split box spring for the master bedroom and switch everything around.
Posted by Megan at 12:31 PM No comments:

And so the new year begins...

Our new year began with a brand new kitchen table and chairs, the loss of some baby teeth, and a brand new cat mysteriously appearing in the barn.

I'm thinking our year's going to end with orthodontia and kittens.  (Is that how you spell orthodontia?)
Posted by Megan at 9:20 AM No comments: 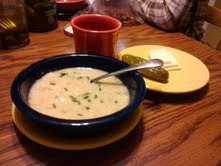 I found a recipe for Low-fat Potato Soup. You know- I just had to mess with it. And guess what- it worked. And I measured ALMOST everything! Yay me! (You do know however, I never measure spices and herbs- I just don't see the point.)

4-5 medium potatoes, smal diced
2 cans of chicken broth
Fresh Chives, chopped
1/2 cup of white wine (I used an open chablis)
2 Tbsp. Minced Garlic (I have to measure this- we're at the bottom of the jar.)
Paprika
Salt, Pepper, paprika, dill
1% milk (What I didn't measure- but I think it's to taste really. It was probably 3 cups.)


Finely dice the potatoes and cook in large pot with chicken broth, spices, garlic, and wine until tender. Now you can either keep the potatoes whole, mash some, or mash all. I have a feeling the amount of milk you use is dependent on if you mash up the potatoes- I left them whole and it was amazing. Now add the milk and make sure your burner is on low so the milk doesn't scald. (If you're feeling crazy- throw in some shredded cheddar here- it's allowed, really.) Heat until warm but don't boil and don't over heat! Serve with some extra chives on top.

And see the pretty Fiestaware I got from my mother-in-law for Christmas?

On a side note, I really feel that the this is the most beautiful Christmas song ever...

Now seriously, I look back 69 years ago (not that I was born) and think about the men and women who rallied around our country when attacked.  The years that followed plunged our entire country into hardships.  Families were torn apart, women had to assume new roles in the workplace- not for personal fulfilment or money (although I'm sure many did need the money) but to keep our country going, producing food and goods and a stable economy.  Everyone's life was touched that day by an attack on a base in Hawaii.

Look at us today.  Not to many years ago we were attacked, out of the blue, and for a time we rallied together.  But then it got too hard.  Public sentiment shifted to blame our leader and question the policies of retaliation and war.  Days go by where we don't think about our men and women serving.  We certainly don't sit down and knit socks for the boys overseas.  In fact, we aren't even allowed to say anything disparaging about the people who are prisoners of war.  They should be given the same rights as those fighting to protect ours.  We forget to put our flag out.

Sixty nine years ago, we, as a country, put everything on hold to defend the best country in the world.  We were outraged that Japan bombed us.  We didn't couch it as "Japanese extremists".  Yes we screwed up royal by interning our Americans of Japanese descent.  But how many of them put up with it because they wanted to prove they were good Americans?  Now if our government doesn't provide us with a job, health care, food, income, etc... we're pissed.  Those men and women who were taken from their homes and businesses and interred had a right to complain.

Sixty nine years ago we were a country who knew that there was something worse than death.
Posted by Megan at 10:45 AM No comments:

Welcome to our growing homestead!

Our homesteading goals have tweaked in the past three years. We have our chickens, a small barn, a plot of land, a crafty mom, a fix-it dad, and two minions- one of which is homeschooled. I guess we've learned to focus more on the home and less on the stead... 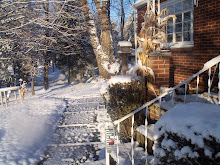 Life from my front porch!